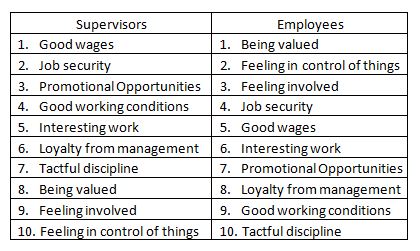 It looks like there’s a big difference between what the employees think and what the supervisors think they think. That’s pretty interesting in itself, but beyond that two things stand out which are particularly important for business owners:-

1)  For the supervisors it’s all about the money. They’ve ranked good wages as number 1. on the list. The employees, on the other hand, have ranked good wages as number 5. To put it another way, the supervisors believe that the more money they pay their employees, the more motivated they will be. But this isn’t what the employees are saying. So there appears to be an opportunity to get better performance out of the workforce by focusing on the things that are important to them, rather than just offering to pay them more money.

2)   Three motivators at the bottom of the supervisors’ list are:

Guess what? The same three motivators appear at the top of the employees’ list. So it looks like this is where business owners and managers should be focusing our efforts. Now let’s look at some simple things that we can do to improve in each of these areas:

There are all sorts of things you can do to let the team know that they are valued. Here are a few of them;-

One of the best ways that you can foster a feeling of involvement is by encouraging a culture of openness, particularly with financial information. Many owners of small businesses are very reticent to share financial information with the people working for them. The usual reason they give for this is fear ie if they knew how much money the business was making the team want a pay rise. In fact, the opposite is usually true. In the absence of hard information, the team normally have an exaggerated idea of how much money the business owner is making and when they find out the truth they discover it’s less than they thought. So treat the team like grown-ups and share information with them.

Feeling in Control of things

In many businesses all decision-making is reserved to the business owner or someone else in authority. Everyone else is there to carry out tasks like a machine ie in a consistent manner, according to a set of instructions handed down from above.

Obviously, this goes directly counter to what the employees say they want which is to feel in control. So it’s worth investing time and effort developing a culture in which employees are encouraged to take responsibility for themselves and decisions are taken at the lowest possible level within the organisation.

It’s also worth getting their input into how things can be made better by having regular team meetings at which you ask for their ideas and suggestions. In addition to giving the employees more control this will also help them feel more involved.

You’ll be amazed how much more you can get from your people by focusing on these three areas rather than the money you’re paying them.